A Hattrick from Adam Tangata helped Halifax extend their winning streak to seven as Sheffield Eagles were the latest side to taste defeat at the hands of the in-form Panthers in the Betfred Championship. A try double from fellow front rower Jacob Fairbank coupled with scores from Conor McGrath and Liam Harris edged Fax past a determined Eagles outfit on a warm summer’s day at Wakefield’s Mobile Rocket Stadium. 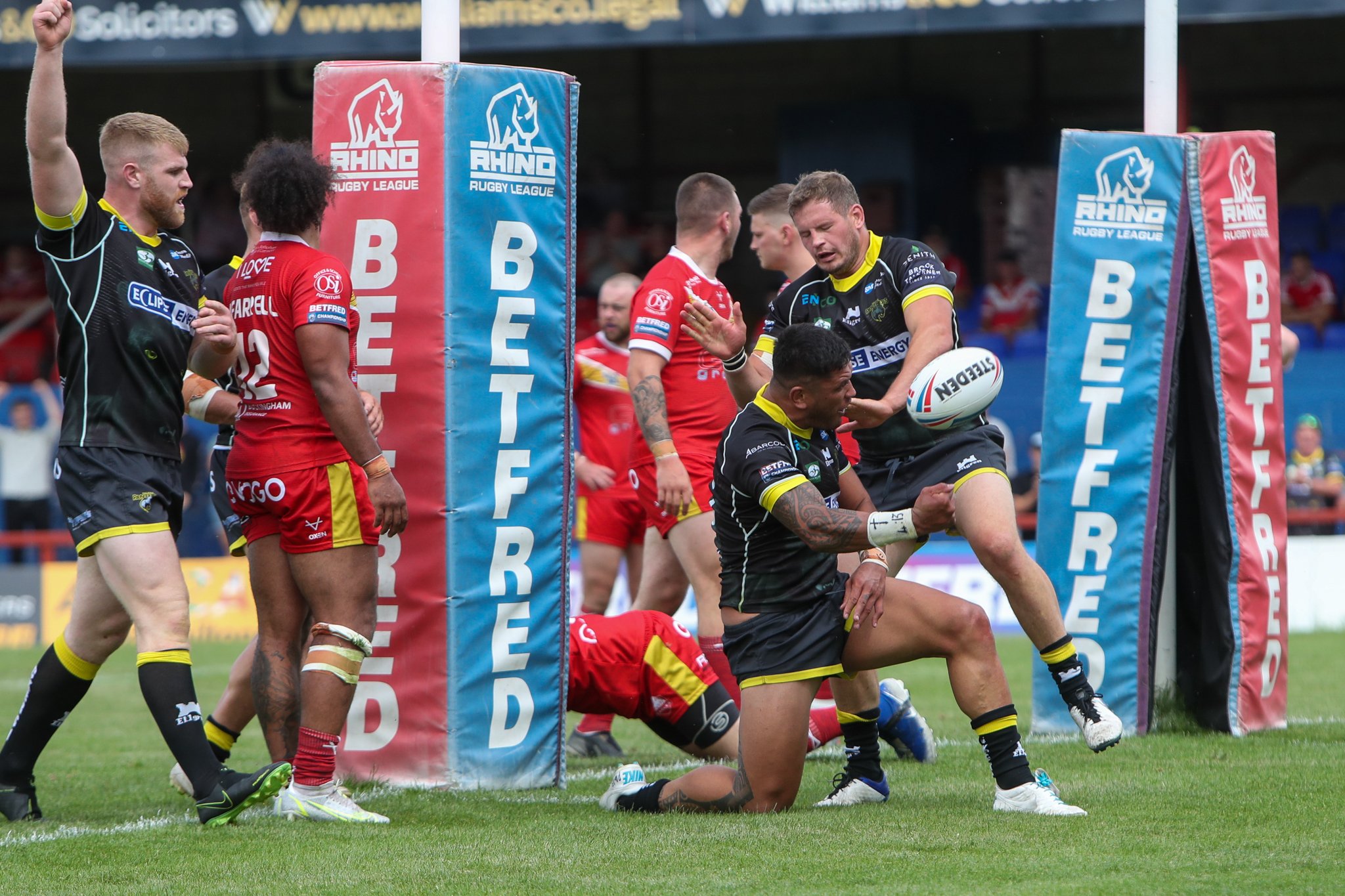 Panthers had the chance to take an early lead as Harris was taken high and late off the ball by Joel Farrell, but the half back pushed the resulting penalty attempt just wide early on. The hosts were first to draw blood as Ryan Millar went in for the first of his three tries on the day in the 13th minute. Izaac Farrell converted for an early six point advantage.

Fax ramped up in attack and defence following the Eagles score and were soon on the board themselves. Captain Brandon Moore spotted an opportunity, sliding a grubber kick behind the line for Jacob Fairbank to pounce on the loose ball. Harris levelled the game up with the conversion from underneath the sticks.

And the Panthers would find further joy from the boot as Tangata took a nice testing kick from Liam Harris to go over in similar fashion on 29 minutes, the Cook Islander slicing through without a finger laid on him. Harris on target with the boot for a 12-6 lead. 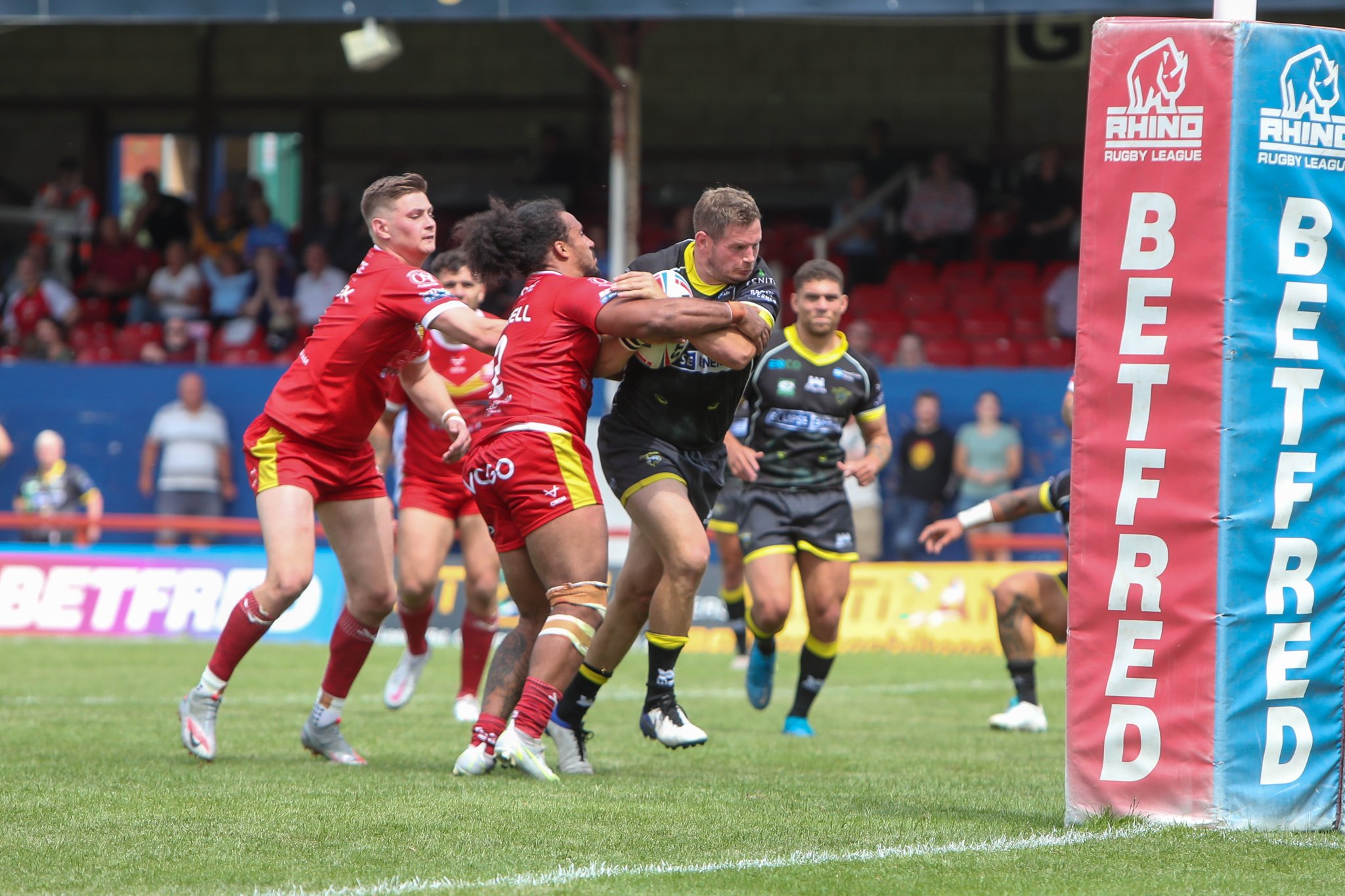 But the Eagles were not going to lay down and showed their attacking threat as former Fax half back Anthony Thackeray dummied his way through for a try in the 34th minute. Farrell maintained his 100% record to level the scores approaching the break.

And it looked like staying that way with half time on the horizon. But another kick and another former Fax stars’ error would give Panthers a welcome advantage to take to the sheds. Scott Grix’s grubber rolled through the legs of winger Rob Worrincy, before eventually making its way to Conor McGrath to touch down for the simplest of scores. 16-12 after the first 40.

The intensity showed no signs of dropping as the teams returned to the field, with committed carries and dominant defence from all 26 players on show. And it would be Sheffield who would edge the noses in front in the 45th minute. Ryan Millar taking advantage of a spilled kick by James Saltonstall to go over on the left edge. Farrell converting from the touchline. 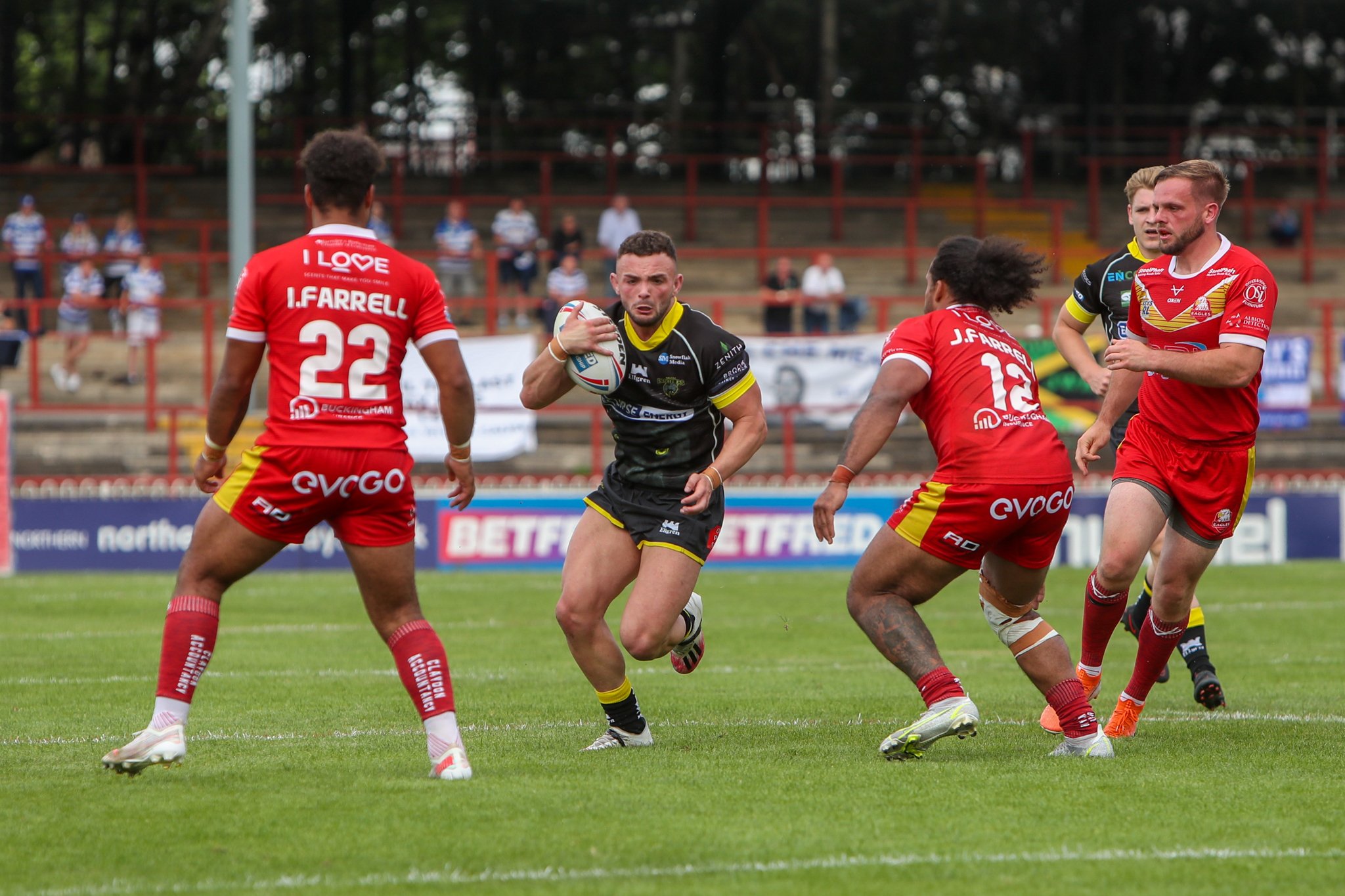 But the Panthers wouldn’t be kept down for long, as the momentum seemed to swing from side to side in 10 minute spells. Adam Tangata kept the ball alive with a good offload, allowing Brandon Moore to fend off the attempted tackle and put Jacob Fairbank through a gap for his second of the afternoon. Harris converting and Fax were back on top.

Now it was the Eagles turn to land a counterpunch of their own as Millar broke free and looked to be going all the way, but for a great covering tackle from Jamaican international full back James Woodburn-Hall. It only delayed the inevitable though, as the ball was shifted right before the Panthers line could regain their structure. Aaron Brown dummying his way over on the opposite side of the field. Farrell once again edging Sheffield ahead with the boot, 24-22.

But as the momentum seemed to shift again, Halifax stepped up a gear with some good rampaging runs in midfield. Man of the match Adam Tangata showing some silky footwork to leave a defender for dead and power over to regain the lead for the visitors. 28-24 approaching the final ten minutes.

And it wouldn’t be long before the Fax forward would complete a famous hat trick as he spun out of a tackle and forced his way over using pure brute strength. It appeared a killer blow had finally been landed. Harris on target to extend the lead to ten. 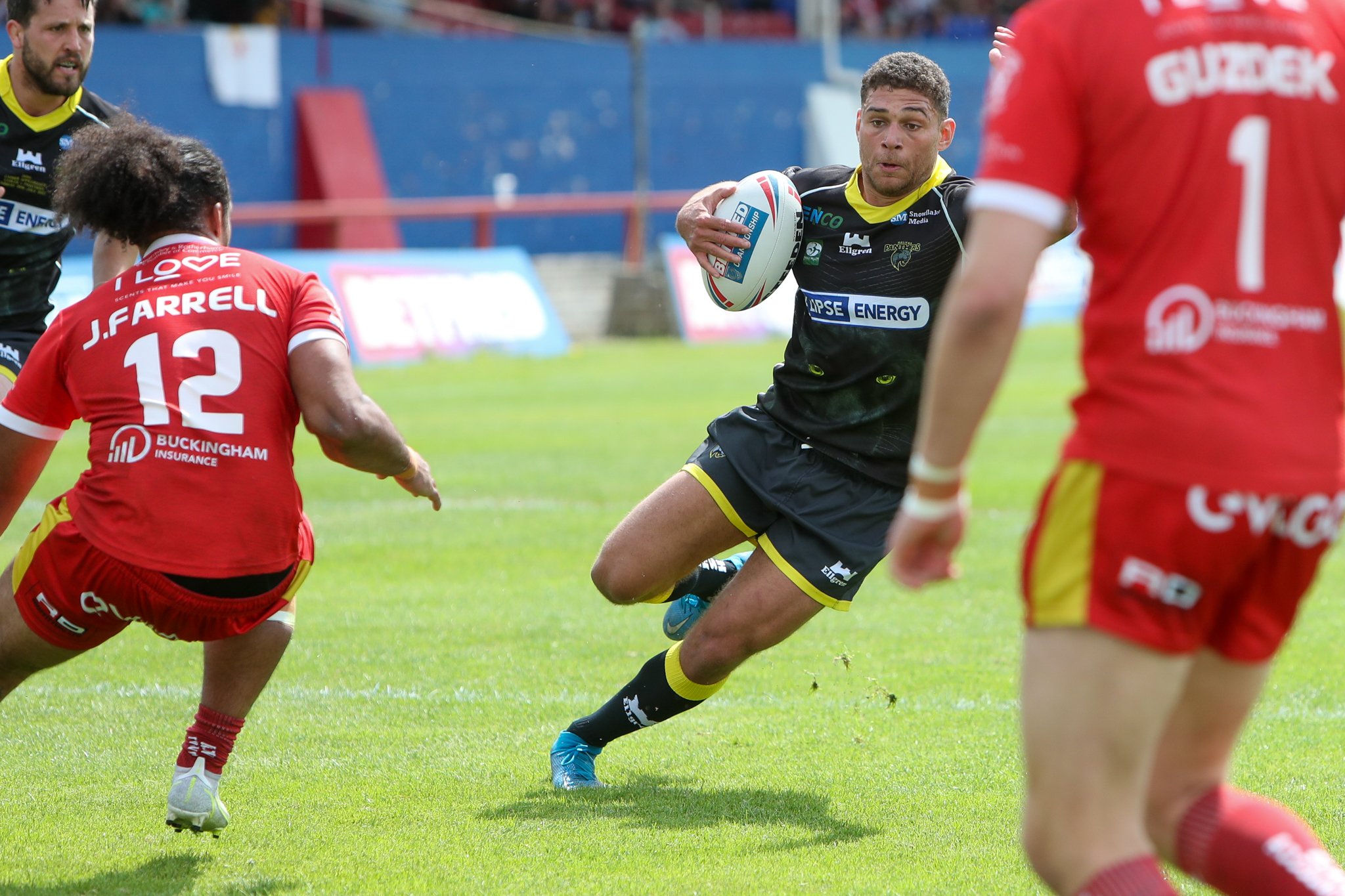 The Eagles were not going down without a fight though, and quickly cut the deficit thanks to a third score of the afternoon for winger Ryan Millar. One score game with seven to play, 34-28.

As the game reached its final conclusion, it looked like a drop goal would be needed to finally secure an unassailable lead. But Liam Harris would go one better than that, as he chipped over the top and touched down his own kick to make sure once and for all that the points would be going home with the boys from the Shay.

“I’m happy with the points but there was some sloppiness at times,” said Panthers head coach Simon Grix. “It was probably a good game to watch for the people that were here as there were some tries in there but we didn’t really pull the trigger on some of our opportunities.”

“There were a few brighter bits in there but you can’t afford to play average every week and expect to win. I thought Adam Tangata made a big difference for us coming off the bench. He was probably a shining light this week. We’ll move on from this one quickly and get into the Bradford game but it definitely needs to go up a notch.”