A decisive James Saltonstall score five minutes from time in a fiery West Yorkshire derby gave Halifax the bragging rights as the Panthers made it 8 wins in a row at the expense of their near neighbours in the Betfred Championship. A healthy crowd packed inside the Shay to witness a frantic and ferocious game of rugby league as the fierce rivals clashed on a bright summer’s afternoon.

Sitting 3rd and 4th in the table respectively ahead of the game, it was always set to be a close encounter. And it certainly turned out to be the case as Simon Grix’s side bravely fought back late on to take the spoils at the death in a nip and tuck encounter. 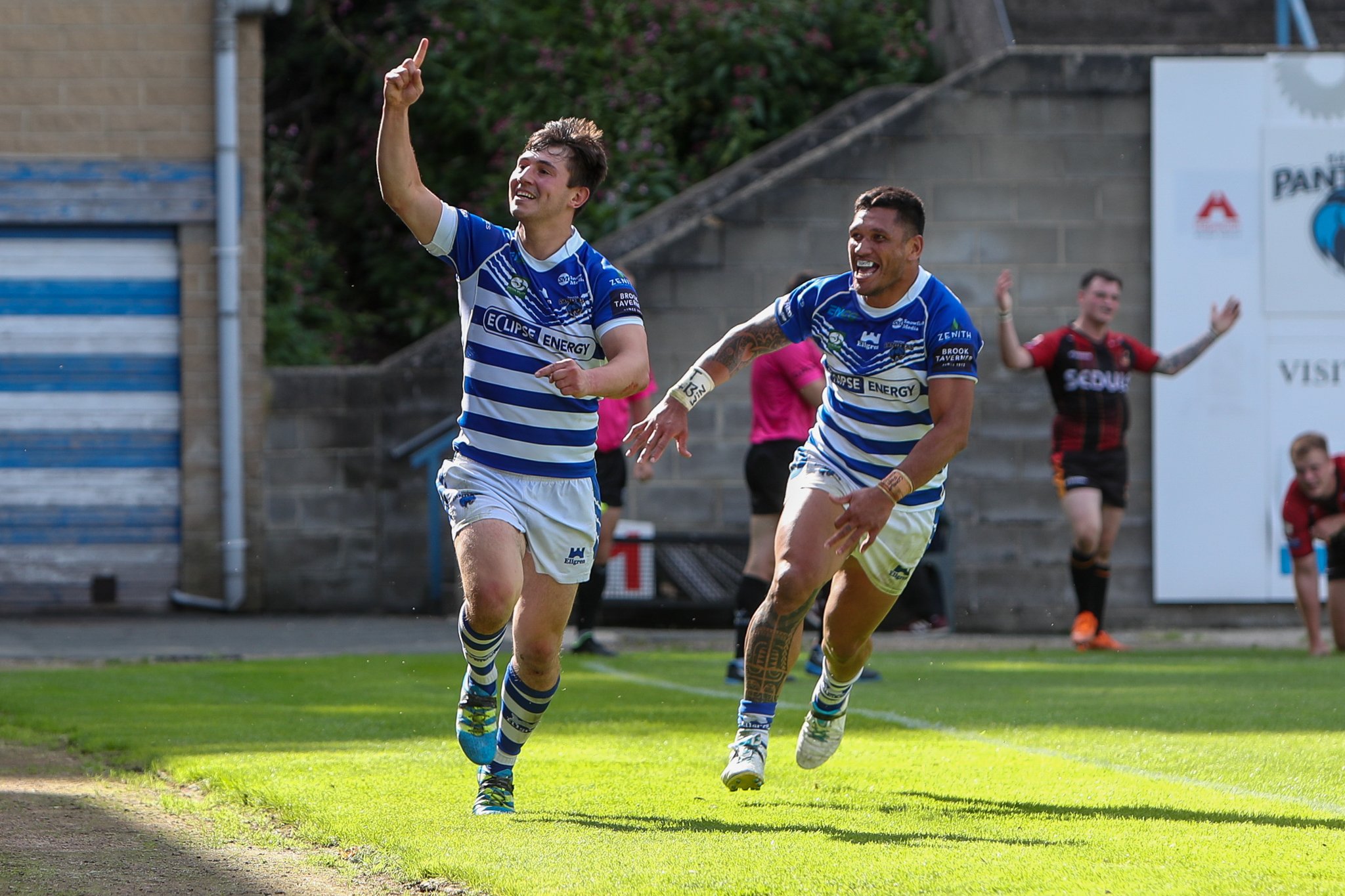 Halifax got off to the best of starts, as Captain Brandon Moore sliced through the Bulls defence straight from acting half and found the supporting James Woodburn-Hall with a precise pass. The Jamaican international full back held off the attention of the chasing Bradford defenders to crash over to the left of the sticks for an early lead. Liam Harris converting for a 6-0 advantage.

But Bradford would hit back with a try of their own almost immediately. With back to back penalties marching them upfield, Brandon Pickersgill went over on the right edge following a sustained period of pressure. Sam Hallas unable to add the extras.

The Panthers appeared to regain the ascendency as Saltonstall looked to have scored after a nice chip kick from Liam Harris, but the play was called back for offside. It wouldn’t take long before Fax extended their lead though. 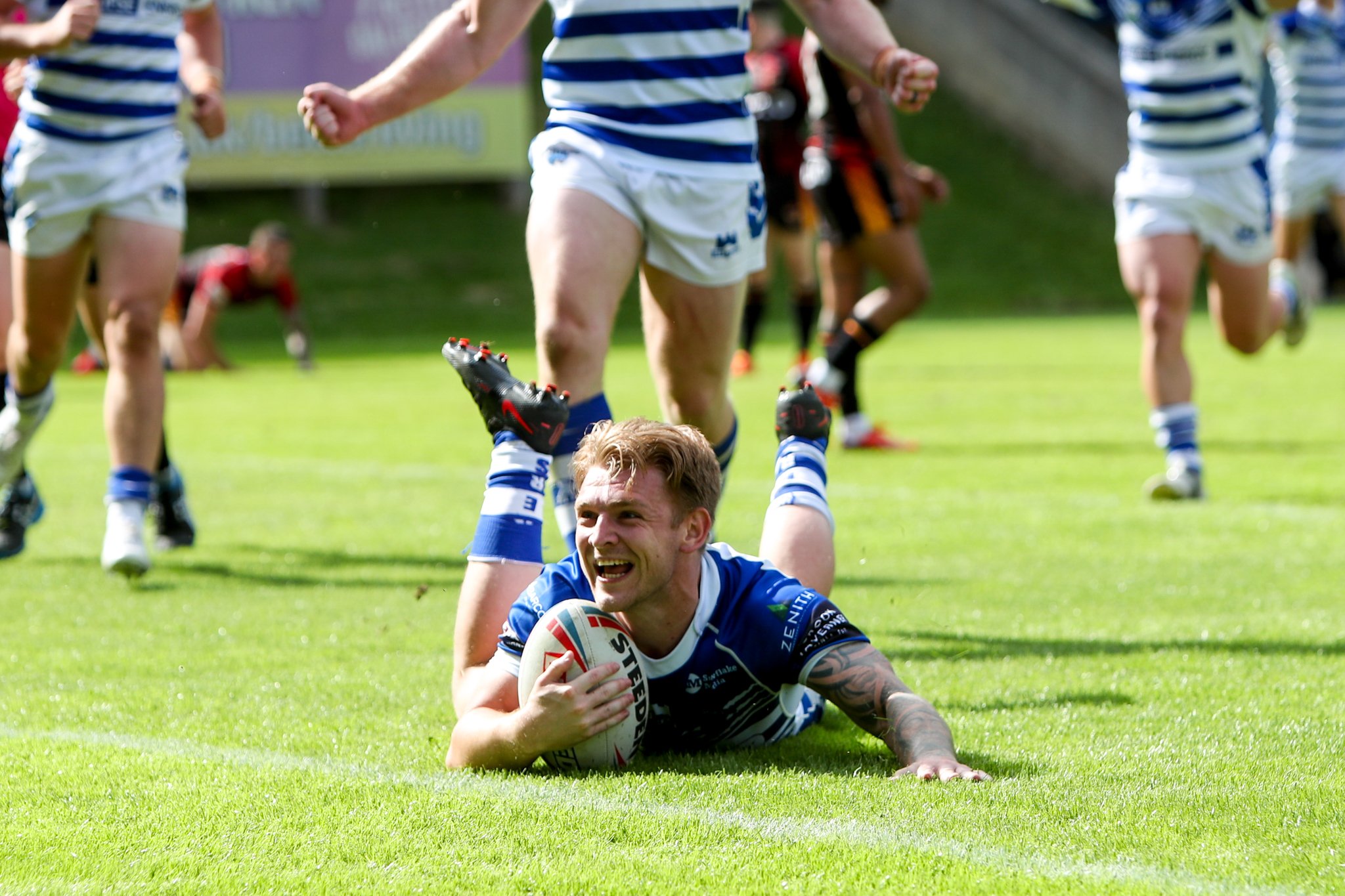 Jordan Lilley dropped the ball in midfield as Ben Kavanagh scooped up to race away on the counter. Before the Bulls line could get reset, Tangata and Grix kept it alive to allow Woodburn-Hall to put Greg Worthington in on the overlap for his first four pointer in Halifax colours. 10-4 with quarter of an hour gone.

And it soon got even better for the Panthers, James Saltonstall intercepting a pass meant for Foggin-Johnston to fly 50 metres and touch down in the corner. Harris again was unable to add the extras but Fax had a solid 10 point lead.

Halifax were starting to look dominant as they enjoyed long periods of possession. But totally against the run of play, the Bulls managed to nick one just before the break. Thomas Doyle forced his way over from acting half to cut the gap. Hallas converted for a 14-10 half time score. 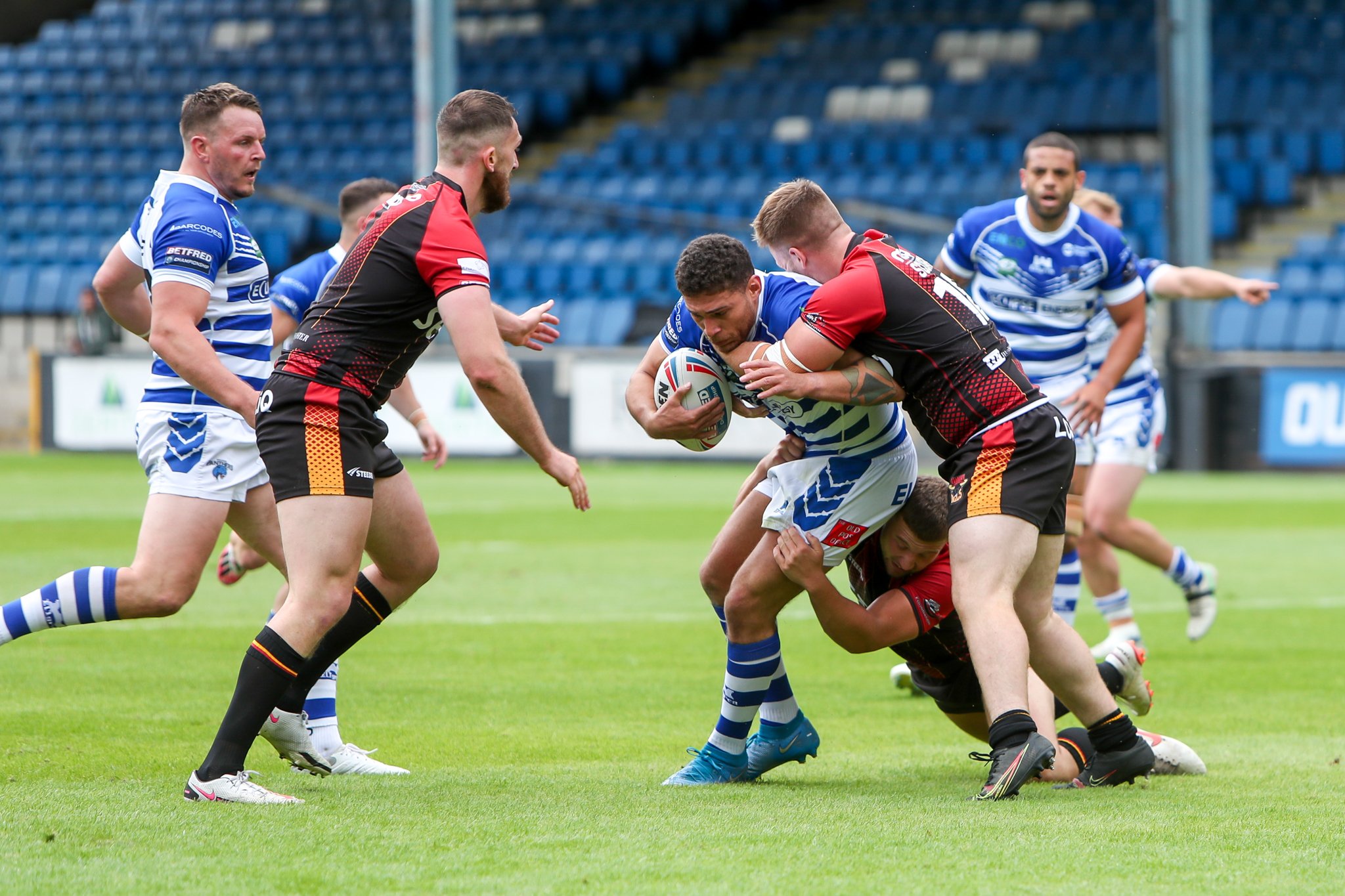 The lightning pace of the game showed no signs of slowing as Bradford came out strongly after the interval. Bradley England crashed over in the first minute of the second half to allow Hallas to put the Bulls in the lead for the first time with the conversion.

The Panthers struggled to find their cutting edge in attack, as multiple chances ended with loose passes flying into touch and errors handing possession back over. And it would soon go from bad to worse for the men in blue and white.

Following a break from Pickersgill that almost saw Foggin-Johnston go over, the Halifax line couldn’t get reset in time. Jordan Lilley kicked wide for Joe Brown to outjump Scott Grix and spin his way over. Missed conversion making it a one score game.

Both sides kept up the commitment and total endeavour as they crashed into each other time and time. The atmosphere was certainly something to behold as both sets of fans made it a real spectacle in the stands. 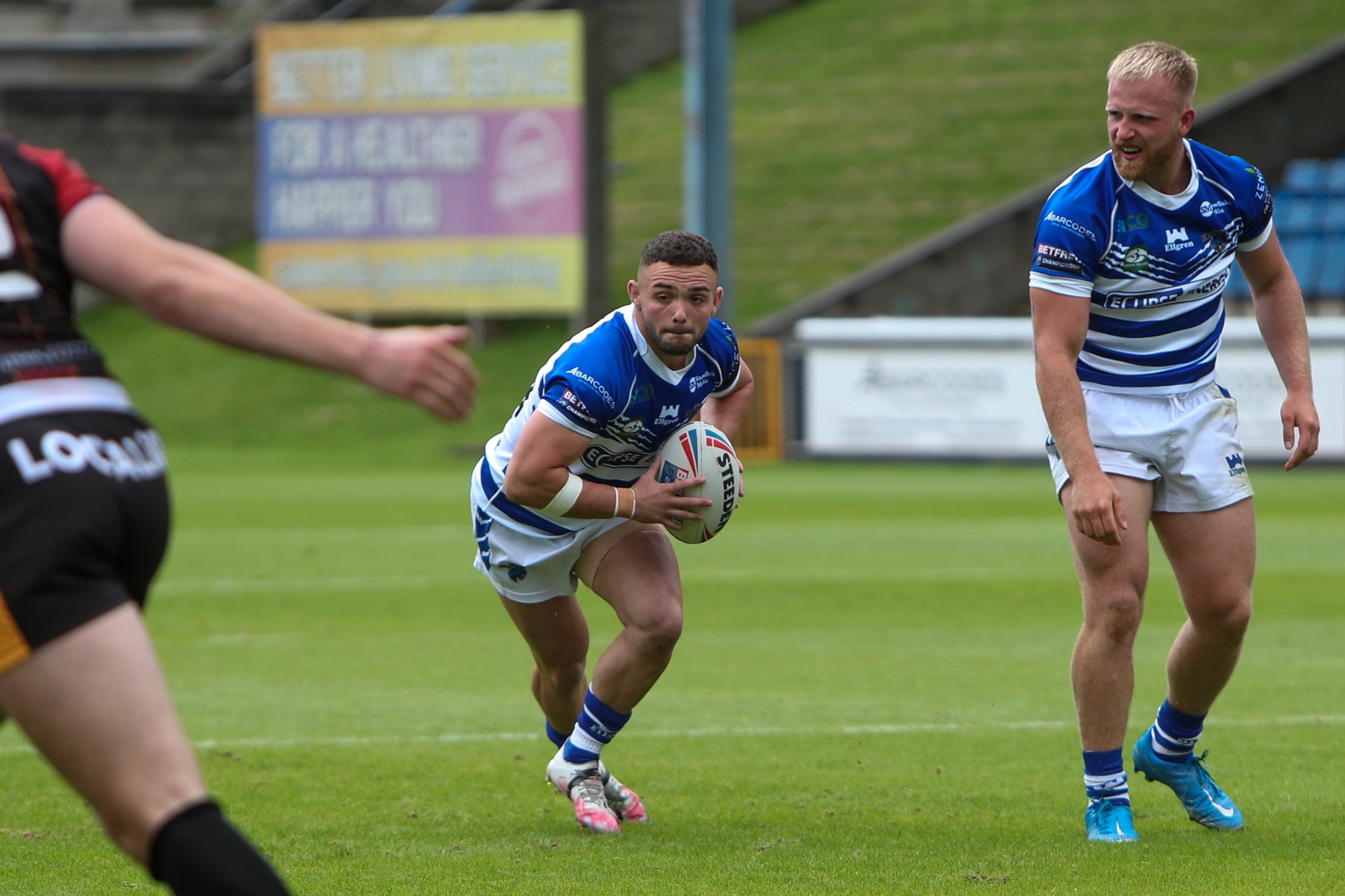 Jordan Lilley attempted a long drop goal with 15 minutes to go, but it was brilliantly charged down by Adam Tangata, who collected and got his side moving forward once more. A decisive moment as the Cook Islander kept his side within range.

And Fax would soon find themselves level once again. Liam Harris put a testing kick up, allowing James Saltonstall to knock it back inside to the half back, who went over under the sticks to the delight of the South Stand faithful. Harris on target with the boot and we were all square approaching the final ten.

As Bradford looked to tire, George Flanagan decided to go early with the drop goal attempt this time, as he slotted it through straight from acting half to give the visitors the narrowest of leads. 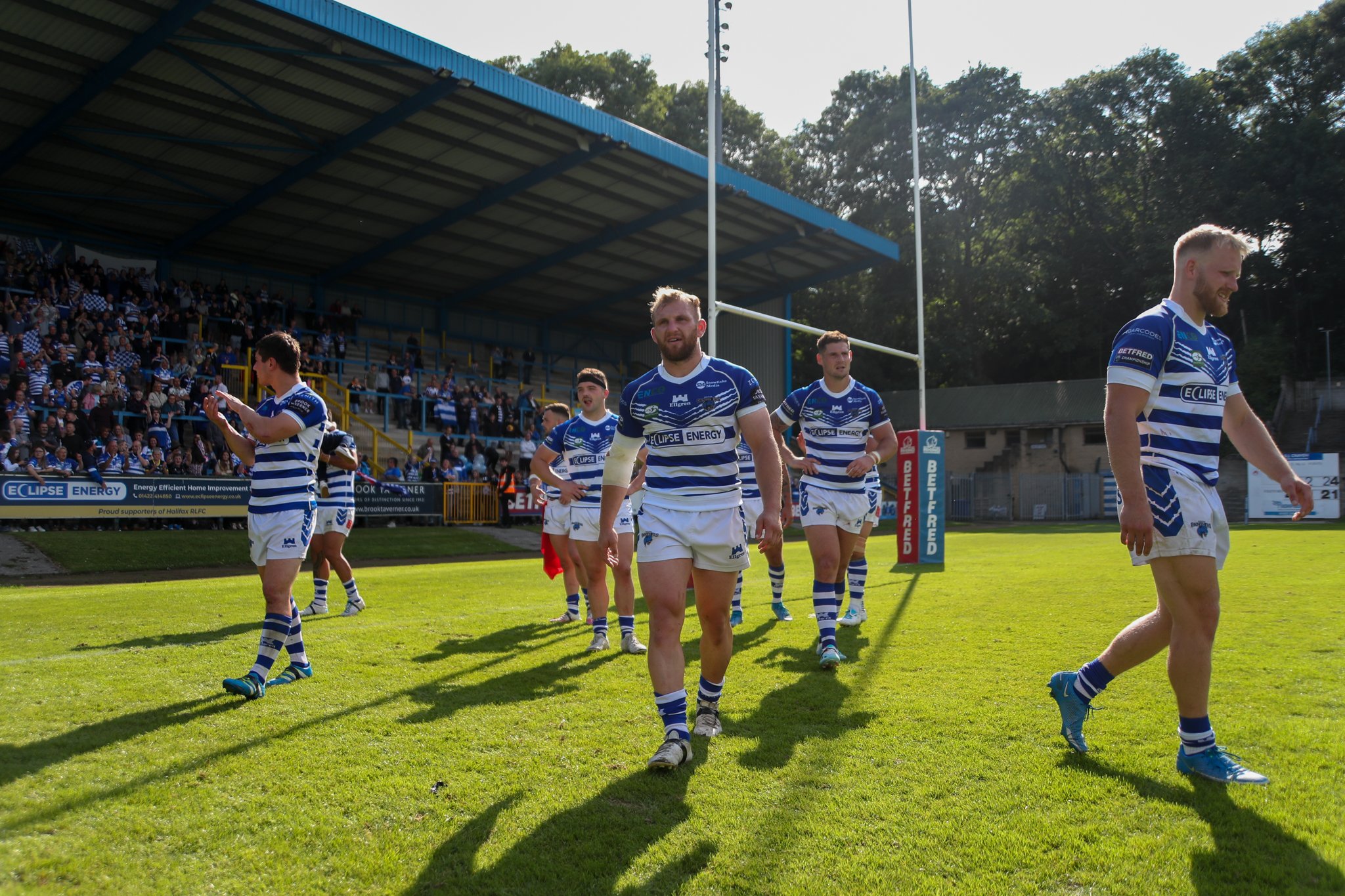 The one pointer only seemed to drive the Panthers on though as they went in search of victory. And they would send their supporters into absolute raptures five minutes from time. Following good linking play on the left, the ball found its way to Zack McComb who showed some clever footwork to break through the Bradford defence and almost go over himself. Before the line could get reset on the last tackle, it was worked wide right for James Saltonstall to dive in at the corner to seal a famous derby day win for the Panthers.